China is a major producer and marketer of paper products in the world, and its total paper production and consumption rank first in the world. In recent years, my country's paper industry has integrated resources and eliminated outdated production capacity in accordance with the "Opinions of the China Paper Industry Association on the Development of the Paper Industry during the Thirteenth Five-Year Plan", and the supply capacity has fluctuated significantly.

The basic components of papermaking machinery are divided into wire, pressing, pre-drying, post-pressing, post-drying, calender, paper machine, etc. according to the order in which the paper is formed. The process is that the pulp output from the headbox is dehydrated and molded in the wire section, compressed in the press section to make the paper layer uniform, dried before drying, then enters the post press for sizing. Then enters the post dryer for drying treatment, and then use The calender makes the paper smooth, and finally passes through the paper reel to form a mother paper roll.

In the process of papermaking, it is essentially a dehydration process, and drying and ventilation of paper is also an important link, which accounts for most of the energy consumption of the entire papermaking process.

In the drying section, all water vapor evaporated from the paper sheet is absorbed by the air and must be continuously removed from the papermaking workshop through forced ventilation. Whether the drying section is well ventilated or not directly affects the evaporation rate of moisture in the paper sheet and the economy of the entire drying process. Good ventilation can reduce the steam saturation in the air, thereby reducing the steam consumption of the dryer and increasing the drying speed.

Generally, in modern paper machines, forced air circulation is used to achieve high efficiency. Dry air heated to about 80 degrees is sent to the lower layer of the drying section with an air intake blower, so that hot steam is absorbed between the dryers to form an upward airflow. Then the hot and humid air collected in the hood is drawn out of the outdoor through the exhaust fan (the waste heat is finally recovered). In high-speed paper machines, due to the increase in the number of dryers, they are usually divided into several sections of blower and exhaust fan groups.

Ⅲ. The necessity of frequency conversion energy-saving transformation of the drying fan

1) Introduction to the energy consumption of the drying fan

In drying equipment, the fans generally used are relatively large, and the fans are almost continuously operated, otherwise it will directly affect the production process and economic operation. Fans commonly deployed in our country are designed according to the maximum flow required under the maximum load condition, and the pressure and flow margin under the accident state are considered (that is, the corresponding insurance coefficient is added). The flow margin of the fan is 5-10%, and the pressure margin is 10-15%. In actual design, it is common for the flow and pressure margin to reach 20-30%. Therefore, the matching motor power of the fan is generally configured relatively large, resulting in the phenomenon of large horse-drawn carts of the fan is very common, and the degree of automation of the equipment operation is quite low, and it is almost completely adjusted manually. Due to changes in working conditions and output, the air volume required by the system It also changes. Most fans adopt the traditional method. The motor runs at full speed. The air volume is adjusted by adjusting the angle of the air door or blade. This method is time-consuming, laborious and difficult to master. The angle of the air door or blade is in one position for a long time. In addition, due to the effect of wind, it is easy to cause the local deformation of the angle of the air door or the blades. In the next operation, there may be a jam phenomenon that threatens safe production, and even a large amount of electrical energy is wasted.

The traditional adjustment system is realized by adjusting the angle of the dampers and blades according to the required air volume. From the process of fan selection and the actual production situation, the constant speed operation of the fan has the following problems:

Generally, the design of the drying fan has a large margin, so that the fan has been running under a lighter load. Since the drying fan is generally adjusted by a baffle plate, it causes a waste of energy and increases the production cost.

The drying fan has a long starting time and large starting current, which poses a greater threat to the insulation of the motor, and even burns the motor in severe cases. The single-axis torque phenomenon generated by the motor during the start-up process causes the fan to produce a greater mechanical vibration stress, which seriously affects the service life of the motor, the fan and other machinery.

Due to the power frequency method, fixed air door or blade angle control method, as the work site and process needs, the air volume should be adjusted at any time to ensure the best process requirements, but because it can only achieve fixed work, it cannot be accurately adjusted.

The drying fan relies on manual adjustment of the baffle or blade angle, and does not have the automatic real-time adjustment function of the air volume, and the degree of automation is low.

The following is an analysis of the power consumption and automation of the three:

The valve adjustment method mainly adjusts the flow rate through the valve opening, but actually changes the flow rate by changing the resistance of the pipeline. When the valve is adjusted, the pipe resistance characteristic changes with the change of the valve opening, and the motor runs at a constant speed, so the pressure characteristic does not change. As shown in the figure below, when the flow rate drops from QA to QB, the stable operating point moves from point A to point B, and the fan power PA is proportional to the area of the 0EBF area.

The speed adjustment method is to change the flow rate by changing the speed. The pipeline is generally in a fully open state. If the fan speed changes, the pressure also changes. When using the speed adjustment method, the pressure changes with the speed, but the resistance characteristics of the tube remain unchanged. As shown in the figure below, when the flow rate drops from QA to QB, the stable operating point moves from point A to point C, and the fan power PB is proportional to the area of the 0ECH area. 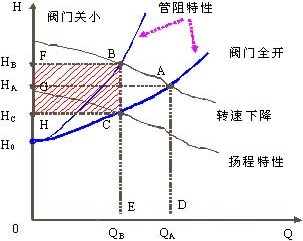 According to the principle of fluid mechanics, the relationship between shaft power P and flow Q and wind pressure H for a fan driven by an induction motor is:

When the motor speed changes from n1 to n2, the relationship between Q, H, P and the speed is as follows:

(2) Comparison of adjustment methods of blade angle and speed 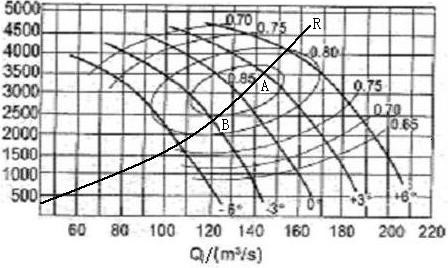 From the characteristic curve and resistance curve of the drying fan in the above figure, it can be seen that the following problems exist in the comparison of the adjustment methods of blade angle and speed:

(1) Due to the fixed blade angle control method, the effective division of the fan adjustment angle (blade angle) is several divisions. During the later drying, the air volume required is the smallest, and the blade angle adjustment cannot meet the throttling air volume. Yes, a part of the air volume must be controlled through the valve, which will waste a lot of electric energy.

The site of Guangdong Dingfeng Paper Co., Ltd. is located in Nanjie Town, Guangning County, Zhaoqing City, Guangdong Province. With more than 40 years of experience in pulping, the current annual output of hardwood bleached wood pulp is 250,000 tons; forest paper and micro-coated paper are 120,000 tons, and he has experience in exporting and investing in the entire plant in Indonesia. It can be described as Asia's pulping Professional manufacturer. 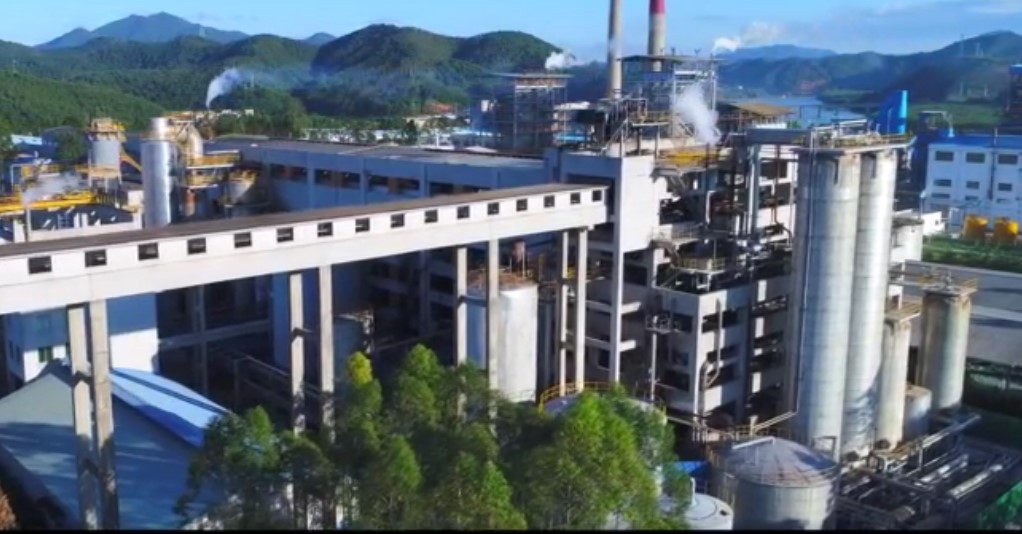 After many investigations and comparisons, the user finally decided to adopt the KE300A series inverter speed control device independently developed and produced by Shenzhen MICNO Electric Co., Ltd. Through the cooperation of technical personnel of both parties, a frequency conversion modification plan for the papermaking drying ventilation system was jointly formulated. The modification plan is as follows:

The monitoring computer of the remote operation console is used on site to carry out the DCS analog quantity setting method. When the frequency converter is running at a variable frequency, the user can adjust the set frequency of the fan in the control room according to the air volume and air pressure requirements in the actual drying process to meet the requirements of the working conditions.

Due to the wind pressure requirements of the fan, the operating frequency is generally above 35Hz. Therefore, the lower limit frequency of 35Hz is set in the control system to avoid entering the surge zone due to too small air volume.

On-site measurement data through the watt-hour meter is as follows:

It can be seen that after investing in a KE300A series inverter produced by Shenzhen MICNO Electric Co., Ltd., the project can save about 290,000 yuan in electricity bills throughout the year. In addition, since the power factor of the KE300A series inverter produced by Shenzhen MICNO Electric Co., Ltd. can reach more than 0.95, which is greater than the motor power factor of 0.89, a large amount of reactive power is reduced. In addition, the soft start of the motor can be realized, which can avoid the impact on the motor insulation caused by the large current start impact, reduce the amount of motor maintenance, save the maintenance cost, and greatly extend the life of the motor. It reduces the labor intensity of operating personnel and is very popular among operating personnel and maintenance personnel.

According to the installation and use of our company's inverters in various fields, we conclude that inverter transformation has the following advantages:

1) The installation is simple, that is, the frequency converter is inserted between the original switch cabinet and the motor, and the original wiring is not changed.

2) It is easy to operate and use, the inverter operation only has simple start, stop and frequency adjustment.

4) The protection function is perfect, the failure rate is low, the fan starts smoothly, the starting current is small, and the reliability is high.

5) The motor does not need long-term high-speed operation, the working current is greatly reduced, and the power saving effect is significant.

6) Since the frequency converter replaces the valve speed control, the defect of high failure rate of machinery and pressure is eliminated, and the equipment maintenance cost is reduced.

7) The vibration and noise of the motor are significantly reduced, and the temperature of the bearing is also greatly reduced.

8) AC frequency conversion speed regulator, with strong applicability, high reliability, easy operation and use, etc., it is welcomed by users. It is used in speed regulation, power saving, and soft start, which has great practical value for enterprises.

The energy-saving effect of the frequency conversion device is obvious. After the frequency conversion speed regulation is adopted, the soft start of the motor is realized, the life of the motor is prolonged, and the vibration and wear of the pipeline are reduced. In short, a set of independent research and development of Shenzhen MICNO Electric Co., Ltd. The KE300A series frequency converter speed control device produced is quite successful in the application of the speed control transformation of the papermaking drying ventilation system of Guangdong Dingfeng Paper Co., Ltd. The advancement and reliability of this series of inverters have been confirmed by many industrial applications.